why, why must we fight? why do we fight, why?

** FOR USE AS DESIRED, YEAR END PHOTOS ** FILE - In this Aug. 5, 2010 file photo, a mourner reacts as he kneels next to the coffin of Marine Lance Cpl.Abram LaRue Howard at the Williamsport Area High School Auditorium in Williamsport, Pa. Howard, 21, was serving in Afghanistan on July 27, 2010 when he died of injuries from a roadside bomb blast in Helmand province.

A young man volunteers for the service of his country. An intelligent and noble man, he seeks no awards, and seeks no fame. He simply sees injustice, he sees lies. He exposes secrets that he believes should be known to the world. A thing that many have done and will continue to do. Is Bradley Manning a spy, did he sell secrets to the Russians? Probably not, he probably helped expose what he thought was worth exposing. But lets get it put to rest.

So good or bad, this young man needs to be tried in a court of law, not held INDEFINITELY for 211 days. It is called innocent until proven guilty, and everyone in the military and white house that has anything to do with this is showing the world that we in the USA don't do as we say, we don't practice what we preach.

Obviously the White House (and military) wants the world to forget wikileaks, and they want to wait it out. . . .when will we have a fair trial for this young man who served his country?

Give Bradley Manning his chance at trial, NOW. Innocent until proven guilty. This man is a decorated serviceman and deserves some respect.

In war we often see only the frontline stories of soldiers and combat. AT TED 2010, Zainab Salbi tells powerful "backline" stories of women who keep everyday life going during conflicts, and calls for women to have a place at the negotiating table once fighting is over.

Iraqi-born Zainab Salbi founded and runs Women for Women International, and has dedicated her life to helping women in war-torn regions rebuild their lives and communities.

In her memoir Hidden in Plain Sight: Growing Up in the Shadow of Saddam, Zainab Salbi writes of being raised in Saddam Hussein's inner circle -- her father was Saddam's personal pilot. She left Iraq for an arranged marriage in the US, which quickly became another form of tyranny. But in 1993, when she heard of the rape and concentration camps in Bosnia, she realized she could no longer remain passive. Salbi founded Women for Women International to help women who are victims of war in every way -- from those who've been physically harmed to those who suffer from the poverty that war and strife inevitably bring. WFWI provides economic and emotional aid, job-skills training, and rights education, empowering women to stop the cycle of violence and create social change.

In her latest book, The Other Side of War: Women's Stories of Survival & Hope, she shares personal stories of women's experience in conflict. As she writes: "War is not a computer-generated missile striking a digital map. War is the color of earth as it explodes in our faces, the sound of child pleading, the smell of smoke and fear. Women survivors of war are not the single image portrayed on the television screen, but the glue that holds families and countries together. Perhaps by understanding women, and the other side of war ... we will have more humility in our discussions of wars... perhaps it is time to listen to women's side of history."

Despite the fact the westward wave of Big Money worship hit the Sierra Nevada range and broke, the war party gained significant ground. Not that anyone ever mentioned our wars during the campaigning beyond bragging about war crimes. These incidents all happened yesterday over the span of an hour:

"The people who are trying to make this world worse are not taking a day off, how can I?" -Bob Marley

My visual art is for informative purposes only and is not for sale.
Peace be with the ones who were left behind from this world.
More outrage is required by the masses. 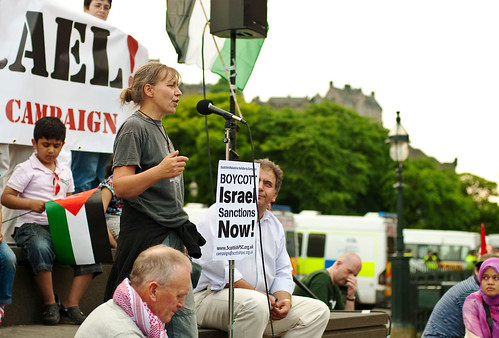 Theresa McDermott, an Edinburgh postal worker, was a member of the Free Gaza Movement flotilla, attempting to deliver humanitarian aid materials and to highlight the illegality of Israel's blockade of Gaza. This is what she did on her holiday.

Last Monday, the Scottish ship and several others were seized on the high sea, and "escorted" to Israel. As part of this operation, Israeli commandos killed nine people on the Turkish aid vessel Mavi Marmara, shooting them at point-blank range.

Amongst the world's outcry, this action was immediately castigated in the baldest possible terms by The Elders, chaired by Archbishop Desmond Tutu. The Elders reiterated their condemnation of the illegal collective punishment of the Gazan people as "one of the world’s greatest human rights violations", and called on the UN to end the blockade.

She was released just in time to attend the funeral of her colleagues in Istanbul. Some of the people who were abducted are still being held, however. She's now back in Edinburgh, and spoke at Saturday's demonstration (5 June 2010).

Afterwards, I went up to her, and told her I think she's very brave. Her reply? "Ach no, I'm not brave!" I hope her colleagues at the Post Office give her a hero's welcome when she returns to work.

Meanwhile the Irish aid vessel Rachel Corrie was captured by the Israelis on Saturday. The people on board are presently being held incommunicado. And soon, a Jewish aid ship will set out for Gaza.


Thank you for allowing me to come from the United States and participate in this rally for peace.

My country has been hijacked by a criminal cabal intent on using the hard-earned dollars of the American people for war, occupation, and empire.

As a result, the national leadership of my country, both Democratic and Republican, became complicit in war crimes, torture, crimes against humanity, and crimes against the peace.

As a Member of Congress from the Democratic Party, I drafted Articles of Impeachment against George Bush, Dick Cheney, and Condoleezza Rice. Later, when Democrats voted to support more war rather than take care of the needs of the people, I declared my independence from them and all national leadership; the Green Party nominated me to run for President, which I did on a platform of truth, justice, peace, and dignity.

I watched as Candidate Barack Obama came here to Germany to speak. I saw tears on the faces of many in the crowd who believed that, finally, there was something worth believing in again. That America had turned a page from its evil playbook that had so outraged and disappointed the world. That good was finally about to triumph over evil.

I know that beleaguered people all over the world, victims of cruel and deadly military, economic, imperial policies finally could believe in hope and change. And America could be believed in again.

Everywhere I went all over the world there were pictures of Barack Obama, slogans “Yes, We Can,” and the words “Hope” and “Change” plastered everywhere.

And after eight years of George W. Bush, Barack Obama seemed to be the man the world was waiting for.

So when the Candidate became the President, we held our breath in anticipation.

That torture and rendition; spying on innocent, dissenting Americans; war and occupation; crimes against the U.S. Constitution and crimes against the peace would end and that the United States would finally join the community of nations.

Sadly, one year into the Presidency of Barack Obama, that is not the case.

On our front door step we have witnessed U.S. complicity in the overthrow of President Zalaya in Honduras and the hostile takeover of Haiti by 20,000 troops with guns sent in when the devastated people needed food, doctors, and heavy lifting equipment.

President Obama has drones killing innocent people in Pakistan, Afghanistan, Yemen, and Somalia. And Administration lawyers are trying to figure out how to legally kill U.S. citizens. You even have U.S. assassination teams on German soil!

Sadly, President Obama is guilty of every item I cited in my Articles of Impeachment against President Bush.

Both Tony Blair and President Obama justify war in Afghanistan by citing the tragedy of the September 11th attacks in New York and on the Pentagon. But my government has not told the truth about what really happened that day. Just like they lied to start a war against Iraq.

Not one more dime for war.

Source page on globalresearch.ca, with video and more material
Collapse